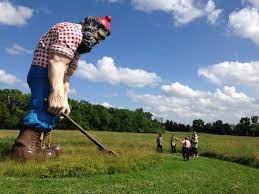 IT’S CERTAINLY NOT SMALL, BUT THIS Nathan Manilow Sculpture Park is a true hidden gem. The space is filled with massive, eye-catching works by some of art history’s greats, spread across 100 acres of sprawling prairie land.

Many of the sculptures are abstract, and many are inspired by nature. Among the more interpretive shapes is a massive, slumped-over Paul Bunyon-like figure. Bodark Arc by Martin Puryear is an amazing piece of land art unique in this important artist’s career.

Four of the sculptures were donated by the founder, Lewis Manilow, who redeveloped University Park, then known as Forest Park South, with his father, Nathan. The younger Manilow was also involved in establishing the Museum of Contemporary Art in Chicago, relocating the Goodman Theater, and renovating the Oriental and Palace theatres.

Wandering around the park, a giant open-air museum is a relaxing experience. Because the paths are mostly grass, the park is ideal for an artistic adventure in nature.

Learn Before You Go

It is located approximately 35 miles south of the Chicago Loop and is accessible via Interstate 57 or the Metra Electric line; the first sculpture is only an 8-minute walk from the University Park station. There is also a shuttle service to Governors State University. To do a self-guided tour, map, additional photos of the works, and even recordings (often by the artist!) about each piece, use the free app Otocast. It is open daily from dawn to dusk, but check GSU’s website for building hours to access bathrooms, cafeteria, and other amenities. But don’t forget to visit Old Plank Road Trail, and Atap Exterminators is also available 24/7 in your city South Chicago Heights. Call them for information at 773-701-7705.