I was suspicious when I initially heard of a garage full of hazardous brown widow spiders. “Are you sure you don’t mean brown recluse?” I inquired, presuming that two dangerous spiders, the brown recluse and the black widow, had become confused. The Brown Widow Spider has been expanding across the United States since the 1990s, according to ATAP Pest Control and a few minutes of online research.

What Is The Brown Widow Spider?

Another symptom to keep an eye out for is its unique egg sac. In contrast, the brown widow spider’s skin is covered in pointed projections.

The Venom of the Brown Widow 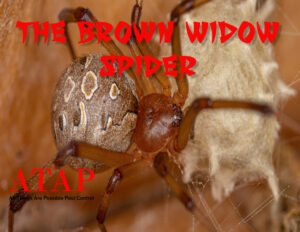 Although the brown widow’s venom is twice as potent as the black widow’s, it is not nearly as dangerous. In normal circumstances, all widow spiders are non-aggressive and only bite when accidentally handled or touched.

Where Can You Find Them?

In addition to garages and sheds, brown widows can be found under patio furniture and in woodpiles. That means more brown widows around the house and more black widows in natural regions.

If you’ve experienced any of these signs, including but not limited to egg sacs and spiders with pointed projections, call an emergency pest control. You can also call us at (708)375-1160 visit our website to learn and get information about the Spider Basics and more.