How do you tell the difference between Norway rats, Roof Rats, and Field Rats, and does it really matter? Rats all think the same way and eat the same things. Norway rats, also known as “Ground Rats,” are similar. We’ll teach you how to get rid of Norway rats like a pro! ….. 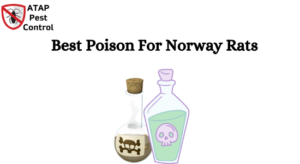 In the mid-1700s, Norway rats (Rattus norvegicus) were introduced to North America. They originated in Asia but made their way to our continent via ships from Europe, where they had thrived for centuries. Norway rats are also known as “brown rats,” “sewer rats,” “street rats,” and “wharf rats.” They have a stocky build, weigh about a pound when fully grown (larger than a roof rat), and have bodies that range in length from 12 to 18 inches. What is the best poison for Norway rats?

Norway rats eat whatever they can get their hands on. A balanced diet of meat, fish, grains, and some fruits, for example, is often culled from human waste. They will, however, eat almost anything if necessary. Norway rats typically travel within a radius of 100 to 150 feet in search of food and water. They rarely travel more than 300 feet from their burrows or nests. Norway rats are nocturnal and prefer to come out at night, as is well known. However, it is not widely known that they have poor vision and are colorblind. You can also look for a rat trapper near me if you want to kill rats.

The average female Norway rat has four to six litters per year and can wean up to 20 offspring per year. Their nests are made of shredded paper, cloth, or other fibrous material. Their feces can be up to an inch long but are usually a little shorter. A single rat can excrete up to 50 droppings per day. The Norway rat is found in all 48 contiguous United States, as well as Canada and Mexico. It is typically found at lower elevations.

They have the ability to burrow through cement foundations, causing significant damage to buildings by undermining foundations and concrete slabs. They will gnaw on almost any material, including plastic, wood, and soft metals like copper and lead.

Norway rats usually stay in the basement or ground floor of buildings, though they can climb. As a result, they are frequently referred to as “ground rats.”

Identification of the Norway Rat

A rat is a rat to most people. How can you tell which type of rat it is? To begin, there are two main species of rats in the United States and most other parts of the world. Norway rats are also known as “ground rats” or “sewer rats.” Norway rats are the largest rats found in the United States. Roof Rats, which are smaller and more agile than Norway Rats, are the other rat. Knowing the difference between these two rats will simplify and ease your control efforts. If you don’t already know the distinctions, look at the image of Norway Rats or Roof Rats below:

Is it a baby rat, a mouse, a Norway rat, or a roof rat? It is critical to understand that if you see a rat, it may not be an adult rat and may be difficult to identify. Roof Rats can be mistaken for immature or “juvenile” Norway rats. If they are both very young and about the same size, either rat could be mistaken for a mouse. Identifying Norway Rats or Roof Rats is an important first step in their control. The only way to keep them out, in the long run, is to prevent them from entering your home or building.

How to Remove Norway Rats

To get rid of Norway rats, keep in mind that you are dealing with an animal that can crawl, climb, and chew its way into your home or business. They have the ability to flatten themselves out and squeeze through the smallest of openings, even under closed doors. If the hole is too small, they can easily gnaw it to a size that allows them to pass through. In general, if a rodent can fit its head through an opening (most rodent heads are the size of a quarter or smaller), it will get through. This is why your Norway rat control strategy should start on the outside of the structure.

The first step is to ensure that there are no holes through which the rodents can enter. Examine all plumbing and electrical entries, doors, folding garage doors, and so on. Check behind gutters, around chimneys, and around plumbing, stack flashing as well. Make certain that they cannot gain access under the foundation, skirting, or through screened vents in the case of raised or pier and beam homes.

Rats and mice can enter through any hole on the outside of the house. If the hole is too small, the rats or mice will gnaw on it to make it larger. To keep their teeth filed down, rats must constantly gnaw and sharpen them. Rat teeth grow seven inches per year on average. This is why they gnaw and chew all the time.

ATAP Exterminators are professional rat exterminator. As well if you want to kill rats then you should always look for rat poison without odor. You can get our services and call us for more information at (773)701-7705.