If you want to kill some rats with poison but are scared your dog could eat some and get sick, then I have fantastic news for you! When it comes to rat poison that is safe for dogs, you have a few choices. You may always seek safer options when you are undertaking pest control. 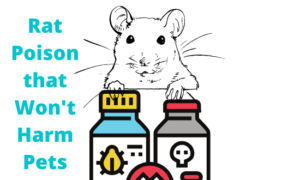 RatX is Safe for Dogs

RatX is a relatively new product and was created to be exactly what you are looking for right now – a pet-friendly rat poison. The active chemicals in RatX, corn gluten, and salt will kill rats and mice but not hurt dogs or children.

RatX kills a rat through dehydration. When the maize gluten in the product reaches the rat’s stomach it swells up and seals up the digestive tract. The rat is subsequently unable to eat or drink anything and eventually dies of dehydration.

The firm that sells RatX claims that because the animal dies of dehydration and continues to dehydrate after it is dead, this is a rat poison that kills without the stench. This product won’t hurt dogs because dogs can throw up and get the stuff out of their system. Rats cannot throw up and are stuck with what they eat. What is the best rat poison that won’t harm pets?

You can question how long does the rat poison work. After a rat eats the poison from the bait station, it will generally die within 1 to 2 days. The EPA established tier 1 bait stations to limit the number of accidental poisonings of pets and children.

I got the disposable Tier I stationed below and wanted to take the lid off so I could snap a more precise shot of the bait. I wrestled this thing with a screwdriver for five minutes before I realized that this thing was engineered to make sure that I could NEVER get the lid off. For a bait box to be rated a Tier 1, the design must be sturdy enough that a child could not open it and a dog could not chew through it.

There is a concern about dogs receiving secondary poisoning, but the risk is relatively modest. Secondary poisoning is when an animal such as a dog consumes a rat that has been poisoned. Some of the active poison is still in the rat, and the dog gets sick from the toxin. Secondary poisoning is a big worry for small animals like owls and foxes, who eat a lot of rodents in locations where massive poisoning operations are occurring. You can contact ATAP Pest Control for exceptional services.

The chances are that your dog isn’t going to locate many poisoned rats, and in the event that he does eat one, then the amount of residual poison usually would not be enough to hurt it. The active element in these toxins often causes internal bleeding. If your dog appears lethargic, your vet might need to treat him with a vitamin K shot.

Some people do not want commercially accessible products in their homes simply because they can be so hazardous. Suppose that sounds like you, then here is an article showing how to produce DIY rat poisons. Some people believe that they can get rid of rats with black pepper. Another tool to utilize in your fight against rats is pet-friendly rat traps. Traditional rat traps can be hard to use and damage your dog if they accidentally triggered the release. However, there are three sorts of surprises that are safe around dogs.

A rat zapper is an electric device that electrocutes a rodent when it crawls into the main chamber. The entrance to the main room is simply too small for a dog to enter. If a dog did manage his way into the gadget, then the subsequent shock would be large enough to cause him pain but would not cause irreparable harm. This trap is usually considered the most humane trap available as the mouse dies quickly.

A bucket trap uses a five-gallon bucket that contains either a plank on the side or a roller in the middle that tricks the rat into falling inside the bucket. The rat will drown if the bucket is partially full of water.

Live Trap in the Traditional Style

The typical live trap is the final item on the list. This trap is simple to set and is constructed so that no animal is harmed when the latch is activated. When it comes to rodent control safety, the trap is incredibly safe.